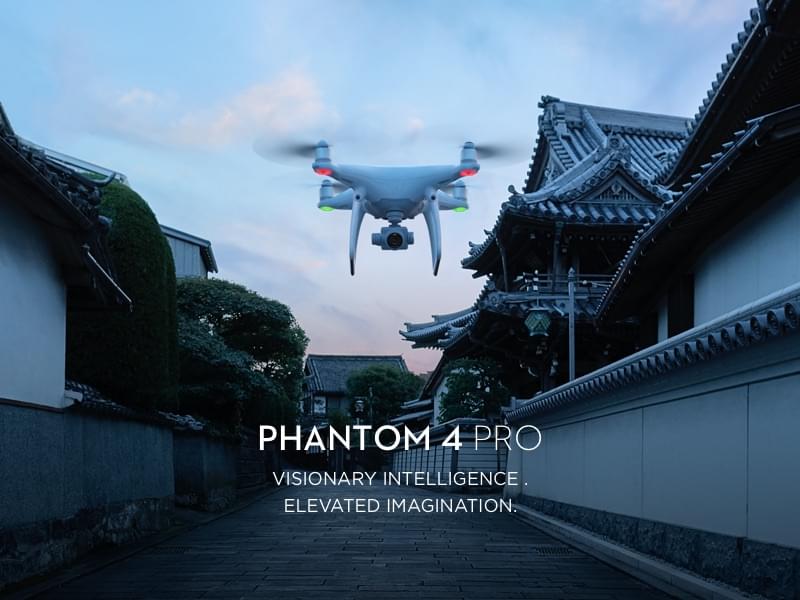 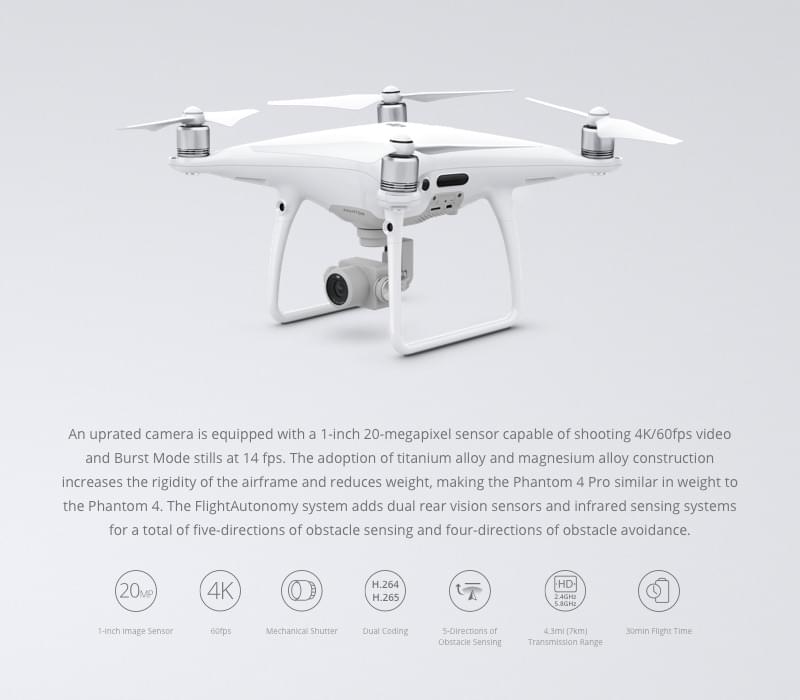 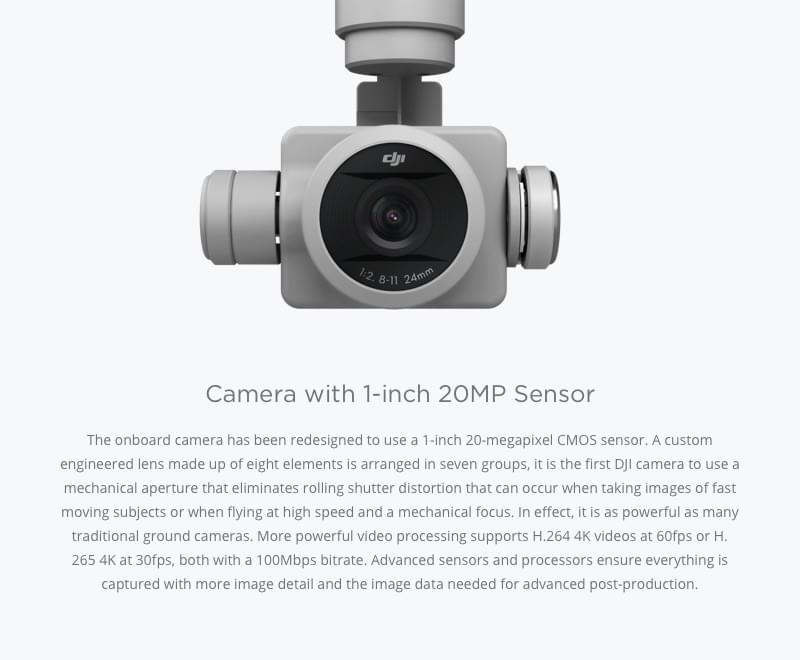 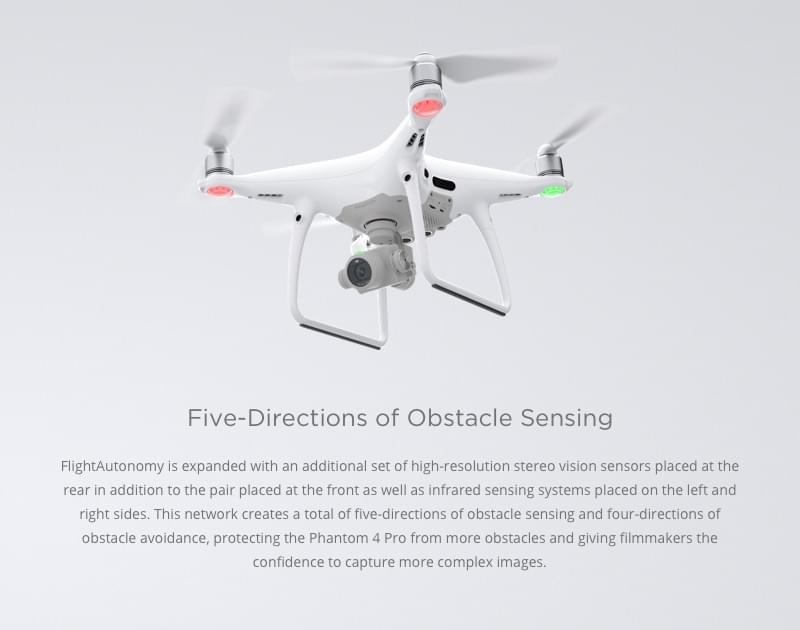 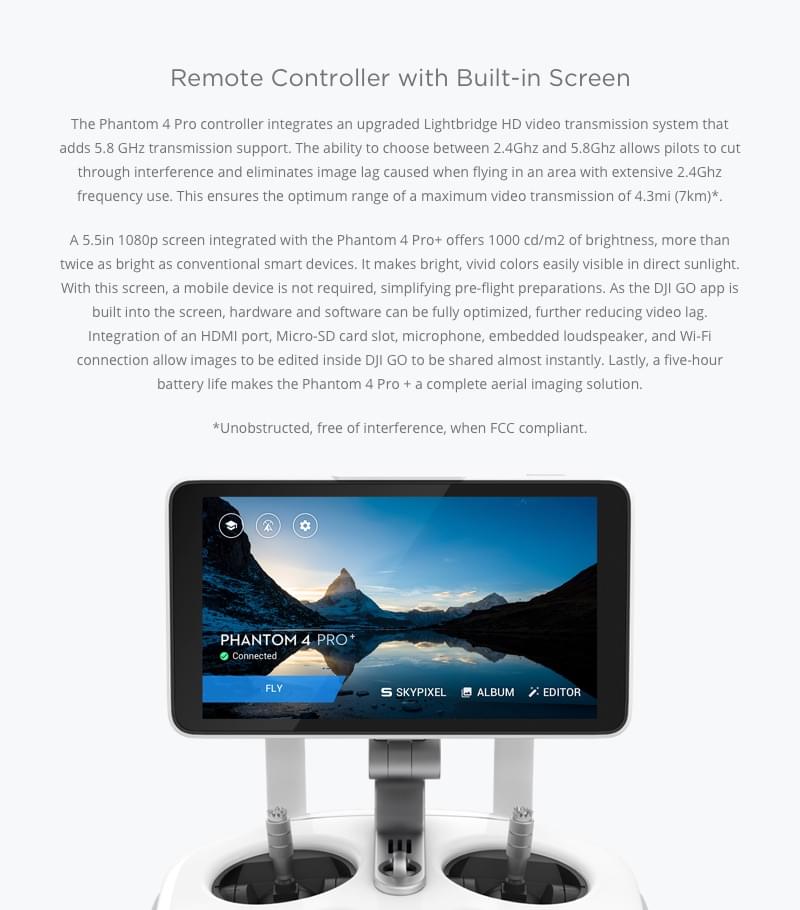 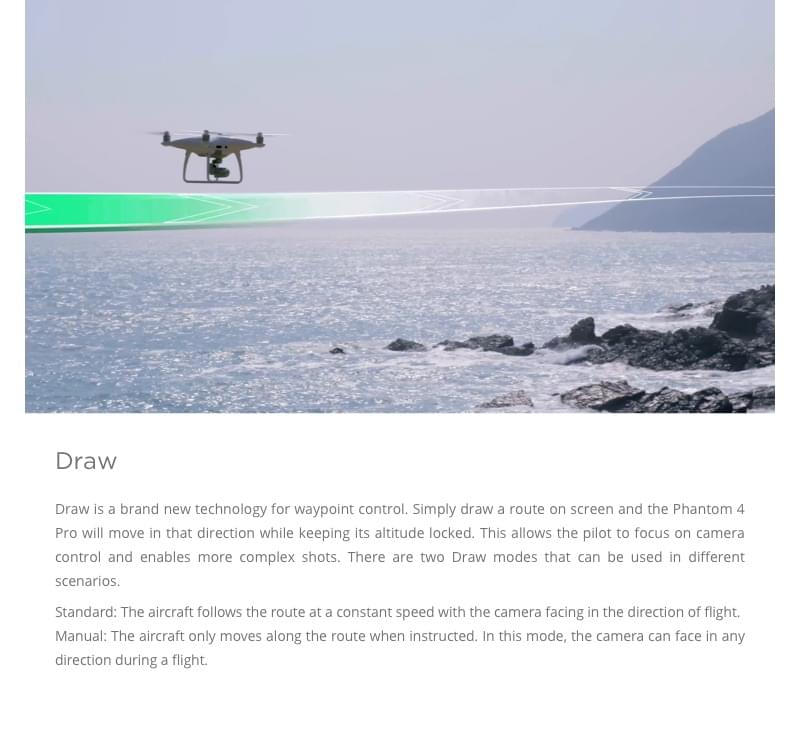 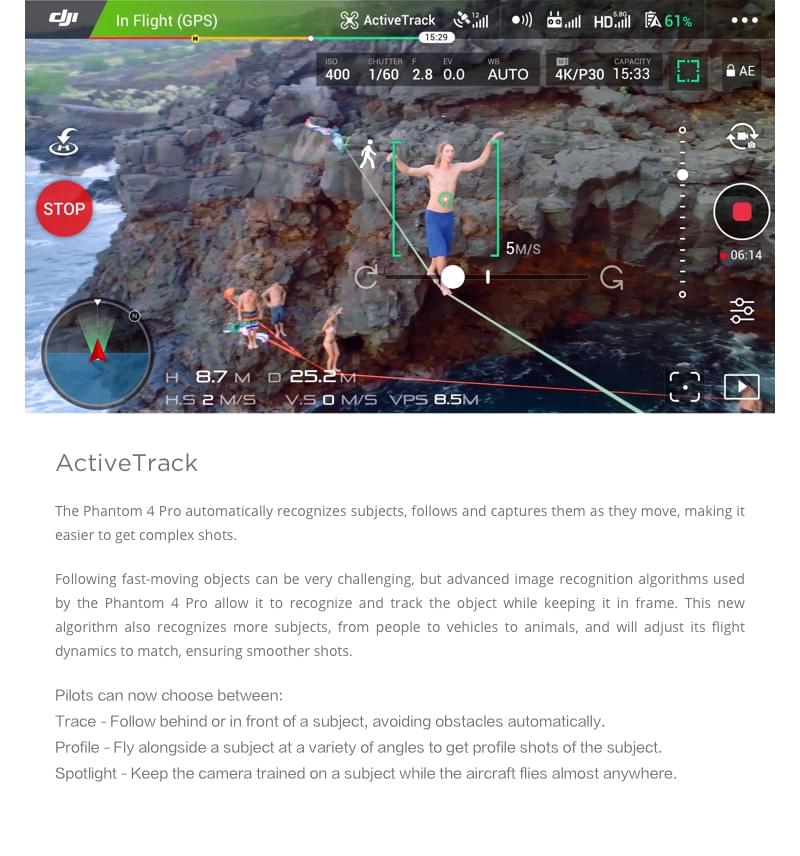 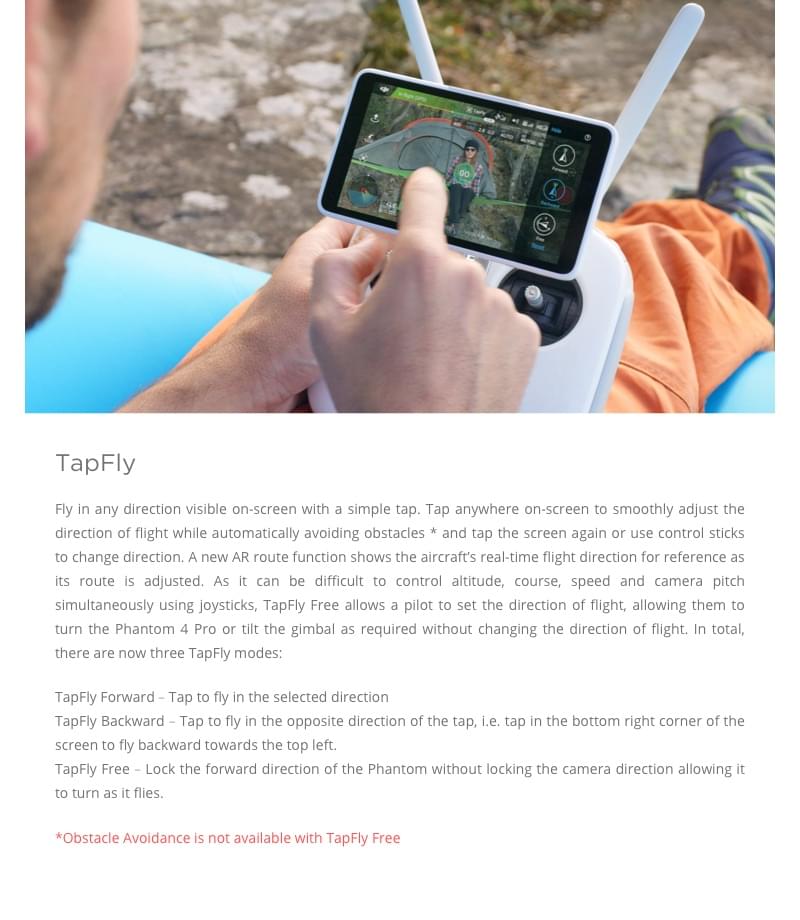 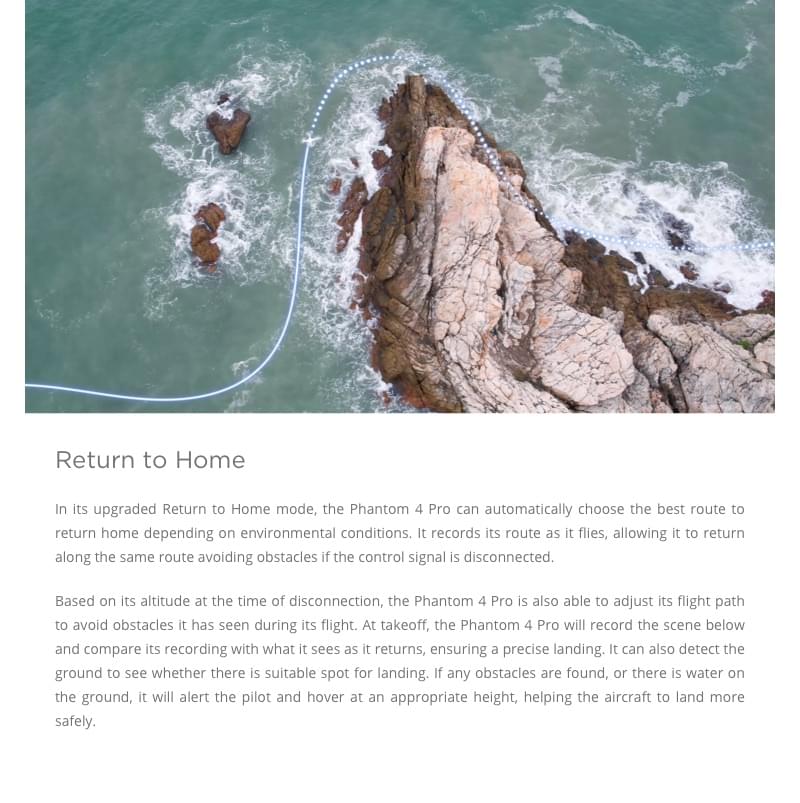 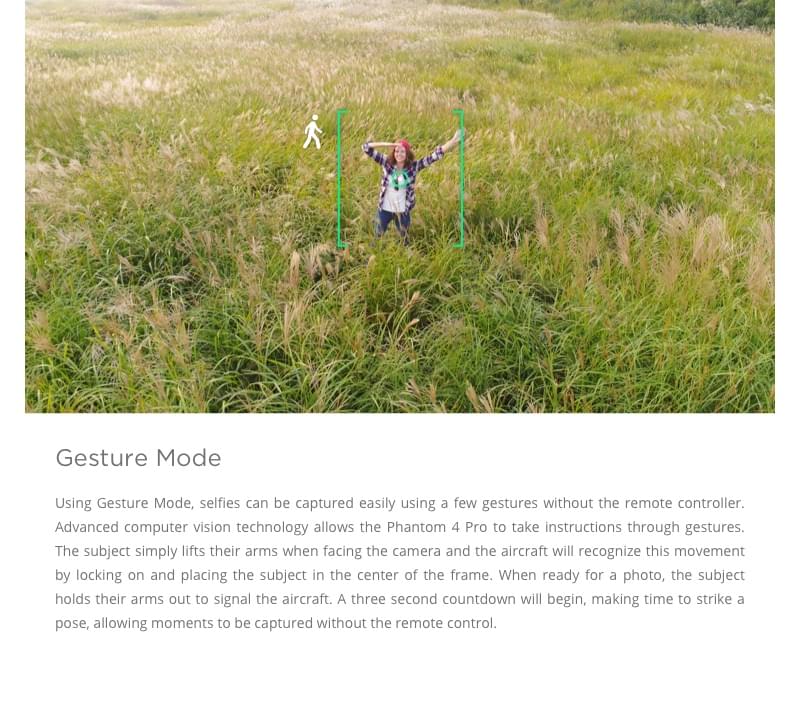 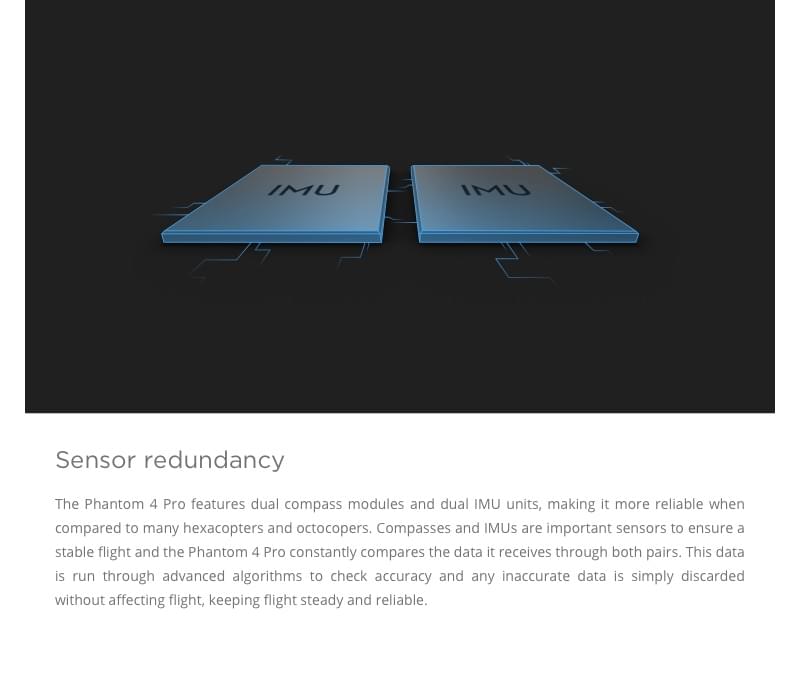 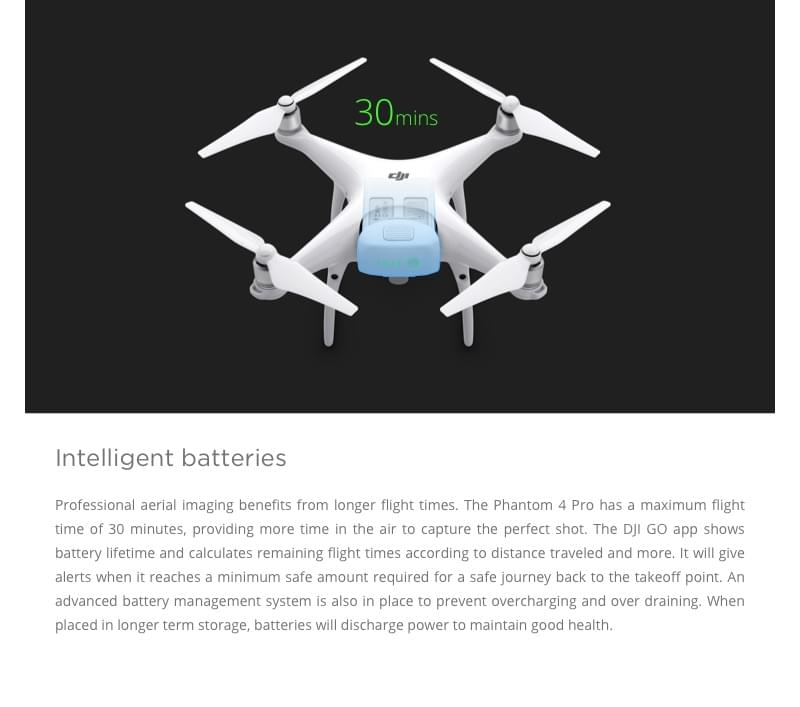 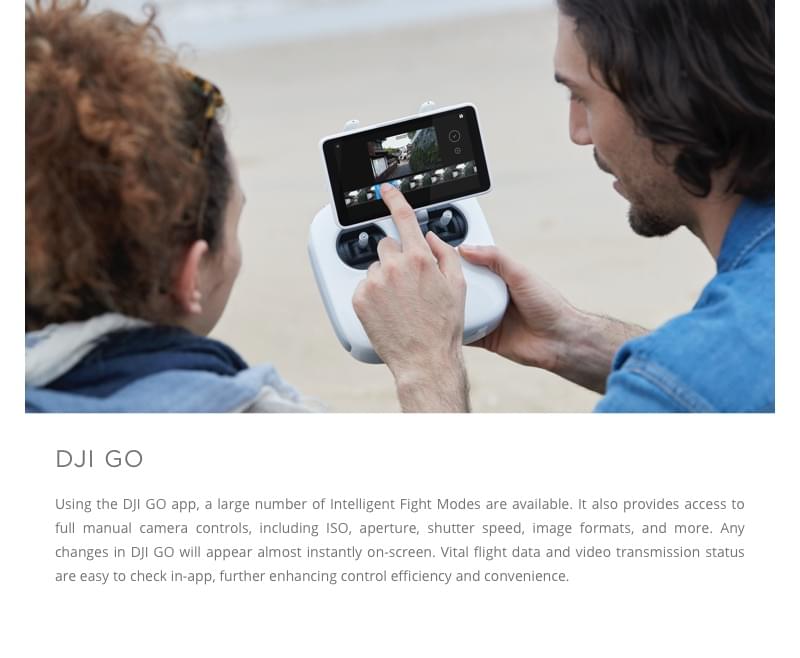 An uprated camera is equipped with a 1-inch 20-megapixel sensor capable of shooting 4K/60fps video and Burst Mode stills at 14 fps. The adoption of titanium alloy and magnesium alloy construction increases the rigidity of the airframe and reduces weight, making the Phantom 4 Pro similar in weight to the Phantom 4.

The onboard camera has been redesigned to use a 1-inch ZO-megapixel CMOS sensor. A custom engineered lens made up of eight elements is arranged in seven groups, it is the first DJI camera to use a mechanical aperture that eliminates rolling shutter distortion that can occur when taking images of fast moving subjects or when ﬂying at high speed and a mechanical focus. In effect, it is as powerful as many traditional ground cameras. More powerful video processing supports H.264 4K videos at 60fps or H. 265 4K at 30fps, both with a 100Mbps bitrate. Advanced sensors and processors ensure everything is captured with more image detail and the image data needed for advanced post-production.

Flight autonomy is expanded with an additional set of high-resolution stereo vision sensors placed at the rear in addition to the pair placed at the front as well as infrared sensing systems placed on the left and right sides. This network creates a total of ﬁve-directions of obstacle sensing and four-directions of obstacle avoidance, protecting the Phantom 4 Pro from more obstacles and giving ﬁlmmakers the conﬁdence to capture more complex images.

The Phantom 4 Pro controller integrates an upgraded Lightbridge HD video transmission system that adds 5.8 GHz transmission support. The ability to choose between 2.4Ghz and 5.86hz allows pilots to cut through interference and eliminates image lag caused when flying in an area with extensive 2.4Ghz frequency use. This ensures the optimum range of a maximum video transmission of 4.3mi (7km)*.

With this screen, a mobile device is not required, simplifying pre-flight preparations. As the DJI GO app is built into the screen, hardware and software can be fully optimized, further reducing video lag.

Draw is a brand new technology for waypoint control. Simply draw a route on screen and the Phantom 4 Pro will move in that direction while keeping its altitude locked. This allows the pilot to focus on camera control and enables more complex shots. There are two Draw modes that can be used in different scenarios.

The Phantom 4 Pro automatically recognizes subjects, follows and captures them as they move, making it easier to get complex shots.

Following fast-moving objects can be very challenging, but advanced image recognition algorithms used by the Phantom 4 Pro allow it to recognize and track the object while keeping it in frame. This new algorithm also recognizes more subjects, from people to vehicles to animals, and will adjust its flight dynamics to match, ensuring smoother shots.

Pilots can now choose between:

Trace – Follow behind or in front of a subject, avoiding obstacles automatically

Profile – Fly alongside a subject at a variety of angles to get profile shots of the subject.

Spotlight – Keep the camera trained on a subject while the aircraft ﬂies almost anywhere.

Fly in any direction visible on-screen with a simple tap. Tap anywhere on-screen to smoothly adjust the direction of flight while automatically avoiding obstacles * and tap the screen again or use control sticks to change direction. A new AR route function shows the aircraft’s real-time flight direction for reference as its route is adjusted. As it can be difficult to control altitude, course, speed and camera pitch simultaneously using joysticks, TapFly Free allows a pilot to set the direction of flight, allowing them to turn the Phantom 4 Pro or tilt the gimbal as required without changing the direction of flight.

In total, there are now three TapFly modes:

TapFly Forward – Tap to ﬂy in the selected direction

TapFly Backward – Tap to fly in the opposite direction of the tap, i.e. tap in the bottom right corner of the screen to fly backward towards the top left.

TapFly Free – Lock the forward direction of the Phantom without locking the camera direction allowing it to turn as it ﬂies.

*Obstacle Avoidance is not available with TapFly Free

In its upgraded Return to Home mode, the Phantom 4 Pro can automatically choose the best route to return home depending on environmental conditions. It records its route as it flies, allowing it to return along the same route avoiding obstacles if the control signal is disconnected.

Based on its altitude at the time of disconnection, the Phantom 4 Pro is also able to adjust its flight path to avoid obstacles it has seen during its flight. At takeoff, the Phantom 4 Pro will record the scene below and compare its recording with what it sees as it returns, ensuring a precise landing. It can also detect the ground to see whether there is suitable spot for landing. If any obstacles are found, or there is water on the ground, it will alert the pilot and hover at an appropriate height, helping the aircraft to land more safely.

Using Gesture Mode, selﬁes can be captured easily using a few gestures without the remote controller.

The subject simply lifts their arms when facing the camera and the aircraft will recognize this movement by locking on and placing the subject in the center of the frame. When ready for a photo, the subject holds their arms out to signal the aircraft. A three second countdown will begin, making time to strike a pose, allowing moments to be captured without the remote control.

The Phantom 4 Pro features dual compass modules and dual IMU units, making it more reliable when compared to many hexacopters and octocopers. Compasses and IMUs are important sensors to ensure a flight and the Phantom 4 Pro constantly compares the data it receives through both pairs This data is run through advanced algorithms to check accuracy and any inaccurate data is simply discarded without affecting flight, keeping flight steady and reliable.

Professional aerial imaging benefits from longer flight times. The Phantom 4 Pro has a maximum flight time of 30 minutes, providing more time in the air to capture the perfect shot. The DJI GO app shows battery lifetime and calculates remaining flight times according to distance traveled and more. It will give alerts when it reaches a minimum safe amount required for a safe journey back to the takeoff point.

An advanced battery management system is also in place to prevent overcharging and over draining When placed in longer term storage, batteries will discharge power to maintain good health.